“We stand against the racism and injustice our Black community endures.” 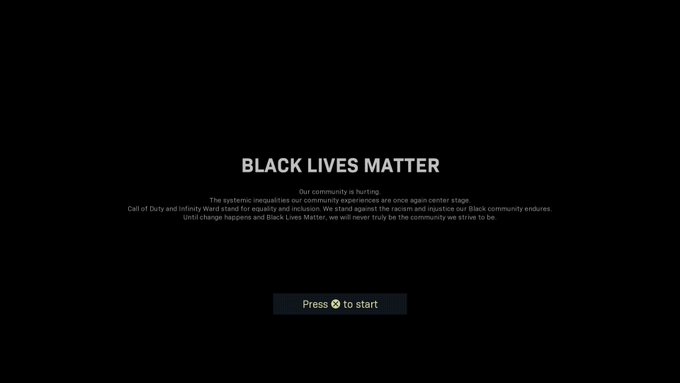 Infinity Ward just released an update for Call of Duty: Modern Warfare that adds a splash screen message in support of the Black Lives Matter movement. Players are being told they need to update their client upon finishing multiplayer games, and once they do, the message appears on screen.

“Our community is hurting,” the statement reads. “The systemic inequalities our community experiences are once again center stage. Call of Duty and Infinity Ward stand for equality and inclusion. We stand against the racism and injustice our Black community endures. Until change happens and Black Lives Matter, we will never truly be the community we strive to be.”

The Verge has confirmed that the message subsequently appears every time you launch Modern Warfare on a PS4. It also appears on loading screens and when switching to a separate mode like Warzone.

Several video game companies have issued statements of support for black communities this week following protests against police brutality in the US and the killing of George Floyd. Placing the message in front of everyone playing a hugely popular first-person shooter, however, could help it reach a wider group of people.

"We stand against the racism and injustice our Black community endures."