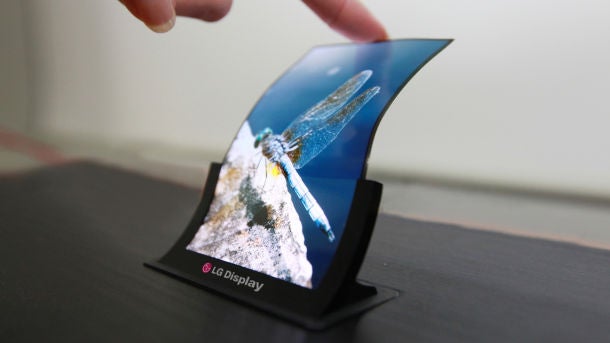 LG's prototype flexible display shown at SID 2013.
Curved screens are slowly making their way into more and more consumer electronics, and LG plans to get ahead of pack by announcing that it will be sending its new flexible smartphone displays into mass production. As reported by Engadget, the manufacturer has built the OLED displays using*plastic substrates with*film-type encapsulation technology instead of glass, creating what the company claims is a "bendable and unbreakable" panel. By using this method of display construction, LG intends to introduce "new products with enhanced performance and differentiated designs."


While no specific devices have been mentioned, LG is expected to announce a 6-inch smartphone with a flexible display, currently*referred to as the G-Flex, in November. The first batch of smartphones like the alleged G-Flex will likely come with a stationary curved screen, as opposed to a panel that can be bent and adjusted at will by end users.
LG's long-time rival reportedly has plans to launch a similar device in the near future as well. Samsung showed off a prototype smartphone with a flexible display at CES earlier this year and, like LG, is rumored to announce a new curved handset next month.