When he's not on the run from the government of Belize [YOUTUBE]bKgf5PaBzyg[/YOUTUBE], John McAfee is apparently still thinking of ways to change how we access the internet. Speaking during the C2SV conference on Saturday, McAfee detailed plans for a new device capable of creating small peer-to-peer networks with encryption to block NSA surveillance, reports*San Jose Mercury News (via The Verge). 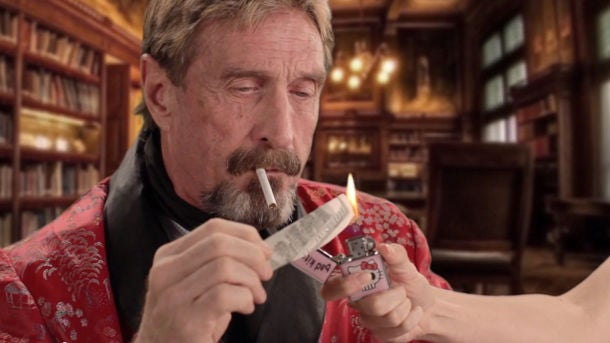 The small, round device--called D-Central--will supposedly cost less than $100. The current design will create a private network of about three city blocks in range, capable of moving around and allowing access to permitted iPhones, Android phones, and other devices while thwarting government agencies from accessing the data. "There will be no way [for the government] to tell who you are or where you are," said McAfee.
Last year, McAfee was involved in a well-publicized manhunt, as Belizean officials attempted to extradite him from Guatemala in order to question him over the murder of his neighbor. After allegedly faking a heart attack, McAfee was eventually deported to the United States. During Saturday's presentation, the millionaire and founder of the anti-virus software which bears his name acknowledged D-Central could be used for criminal activity.*"It will of course be used for nefarious purposes, just like the telephone is," said McAfee.
A countdown clock has started on the D-Central page, with an apparent launch date 174 days out.

fuckin' hilarious....I use to use macafee but it did exactly what he was saying and have never used it since 2005....